The patron saint of our parish was a humble, uneducated young girl. Her faith led her to believe and spread the message of Lourdes in spite of the skepticism of her family, her parish priest, and her community.

At one point, her priest said to her, "the next time you see The Lady, ask her who she is." When Bernadette saw Mary, she asked this question. Our Lady asked her, "Who wants to know?" Bernadette replied with "my pastor." Mary said to her, "tell him I am the Immaculate Conception." Upon hearing this, the parish priest knew that Bernadette didn’t understand the meaning of these words; therefore he knew she was telling the truth.

St. Bernadette was born the oldest daughter of Francois Soubirous and Louise Casterot in Boly Mill in Lourdes, France on January 7, 1844. She was baptized at her local parish Church in Lourdes on January 9, 1844 the day of her parents’ first wedding anniversary.

Bernadette Soubirous always put God first in her life. Her entire existence revolved around Him. Her relationship with Our Lord was a sign of great faith and infinite trust. Even during times of adversity, difficulty and suffering, Bernadette remained steadfast, happy to say, "If the Good Lord allows it." In Bernadette’s own words, "Mary chose me because I was the most innocent thing. If she had found someone more innocent than me, she would have chosen her instead."
Presently St. Bernadette’s body rests inside a bronze and crystal casing in the chapel of the Convent of Nevers, France. 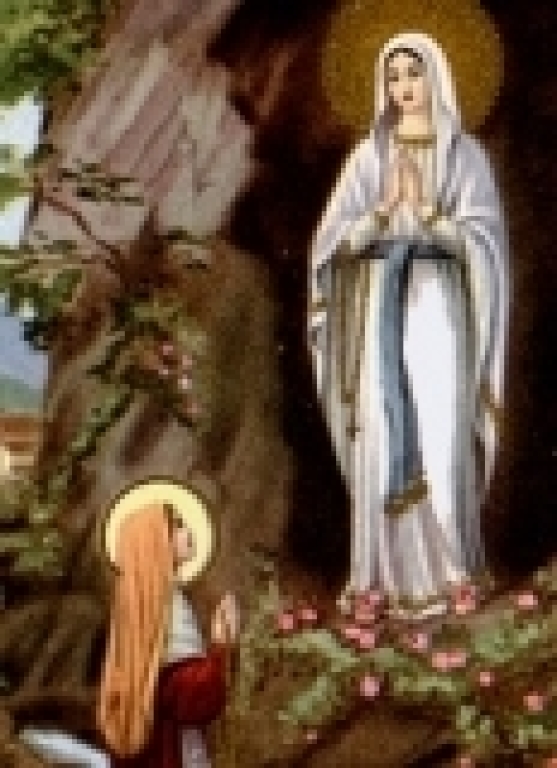 January 7, 1844
Bernadette was born the oldest daughter of Francois Soubirous and Louise Casterot
January 9, 1844
Bernadette Soubirous was baptized in the local parish on the date of the first anniversary of her parents' wedding.
February 11 – July 16, 1858
A total of 18 apparations with Our Lady
July 4, 1866
Bernadette Soubirous left Lourdes and entered the Convent of Saint Gildard to become a nun under the Order of the Sisters of Charity in Never, France.
October 30, 1867
Bernadette Soubirous took her Religious Vows with 43 other novitiates.
April 16, 1879
Bernadette Soubirous passed away from asthma and tuberculosis of the bones of her legs.
September 23, 1903
Bernadette’s body was exhumed, as a part of the ecclesiastical investigation leading up to beatification and canonization. Her body was found to be incorrupt, without a trace of decay.
December 8, 1933
Pope Pius XI proclaimed Bernadette Soubirous as a saint.